Last week I attended a Mapathon with Missing Maps at King’s College. A map-athon is a group of people getting together to create maps.

While we already have all sorts of maps online, this mapathon was to create maps for OpenStreetMap – an opensource map of the world. It is often described as the Wikipedia of maps; anyone can contribute to it! Check out your own street on OpenStreetMap – is everything mapped?

OpenStreetMap started as a crowdsourced experiment in 2004. A huge a 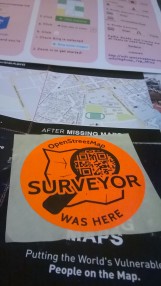 mount of people have contributed to the map since, but there are still a lot of missing bits. And the answer to this issue isn’t Google, because many of these areas are missing on Google Maps too. The key missing maps are of informal settlements, urban slums, which is where organisations like Doctors Without Borders (MSF) and the Red Cross work in humanitarian relief. To effectively track the spread of diseases like Heptatis A or even Ebola, these organisations need accurate maps. They therefore approached the Humanitarian OpenStreetMap Team (HOT). Together the three organisations get volunteers together to work on a piece of this earth that remains unmapped. As a result of these mapathons, MSF and BRC are seeing the first ever maps of some of the areas they are working in.

The link between maps and health isn’t new. At the start of every mapathon, Yvan Gayton from MSF recalls John Snow’s work on cholera in 1854. The English physician set out to map the cholera cases around London during a huge outbreak. Through his detailed maps, he was able to trace the source of the epidemic to a specific water supply and prove that cholera was transmitted through water systems. This revolutionised water and waste management system in London and later other cities.

The process of the actual mapping is rather simple. The mapper traces lines visible on a satellite image of the area selected by the Missing Maps team, one square at a time. The specific task may be about mapping houses, roads, buildings, areas, water… or all of them. This means drawing a lot of lines, squares and circles, trying to be as precise as possible and tagging each area based on one’s best guest.

The next step involves a team of more experienced mappers, who verify each square. Then, a team on the ground will check the validity of the data and put a name to each road and a description to some of the buildings. The end product is a map that is detailed to each house and can help the MSF or BRC teams respond to an emergency. Staff can map the origin of incoming patients to help the teams respond to the epidemic and contain it better.

What I love about mapping is that I can contribute to a larger goal from my humble laptop and help other people carry out their life-saving humanitarian work. So, if you are in London, join us at the next mapathon – just follow their announcements on Twitter – or you can join in remotely! And if mapping really is your thing, you could also help MicroMappers at mapping the remaining coconut trees in the Philippines after Typhoon Haiyan.